Several weeks ago Split Coast Stampers had a forum dealing with organizing craft supplies by color.  The more I thought about it, the more it made sense. I realized that for me it would be better to have 1 box out rather than a ribbon box, a marker box, the box with my embellishments… you get the idea.

As I was sorting  I was amazed at how much stuff I had, and how many things I had forgotten were there!   The reorganization was worth it just from that standpoint.

My initial plan was to make a box for each of the primary and secondary colors, plus black/white/neutral, but as I began to amass piles of each color I realized that I needed to make some slight adjustments.  Because I had so much blue stuff I broke that pile down into a blue pile and a turquoise one.  I did the same with the red pile- I ended up with red and a pink pile.

I left my paints, alcohol inks, and PearlEx where they were- they were happy there.

It took a while but it was worth the effort.  The thing about organizing craft stuff, at least in my experience, is that needs and ways of organizing things changes from time to time, so if one method doesn’t work, something else can be tried.

Now to the “yellow” and “Dutch Guilders” part.  After I had everything in boxes I realized that my smallest stash was definitely yellow.  I just don’t use much of it.

I needed a double-sided tag for my Yahoo Inchies group and thought I would use yellow on it.  Looking back to my 1998 portfolio I spied a  tag on which I had used an image of a yellow 50-guilder note.  I liked it back then, but I was sure I could do better now.  Just as an aside, I love  Dutch Guilders!  The colors are just wonderful.

Here is the picture of the front side:

And here is a pic of the backside.

I wanted to incorporate my information into the design, so each leaf of the flower has a bit of info. Fun, huh? 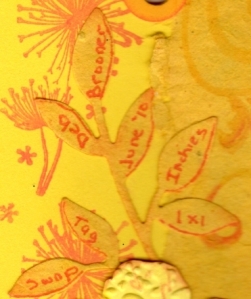 So here’s my question:  what color do you need to get out and do something with, or what older art piece do you have that you could update? Give me a comment and let me know what you come up with!